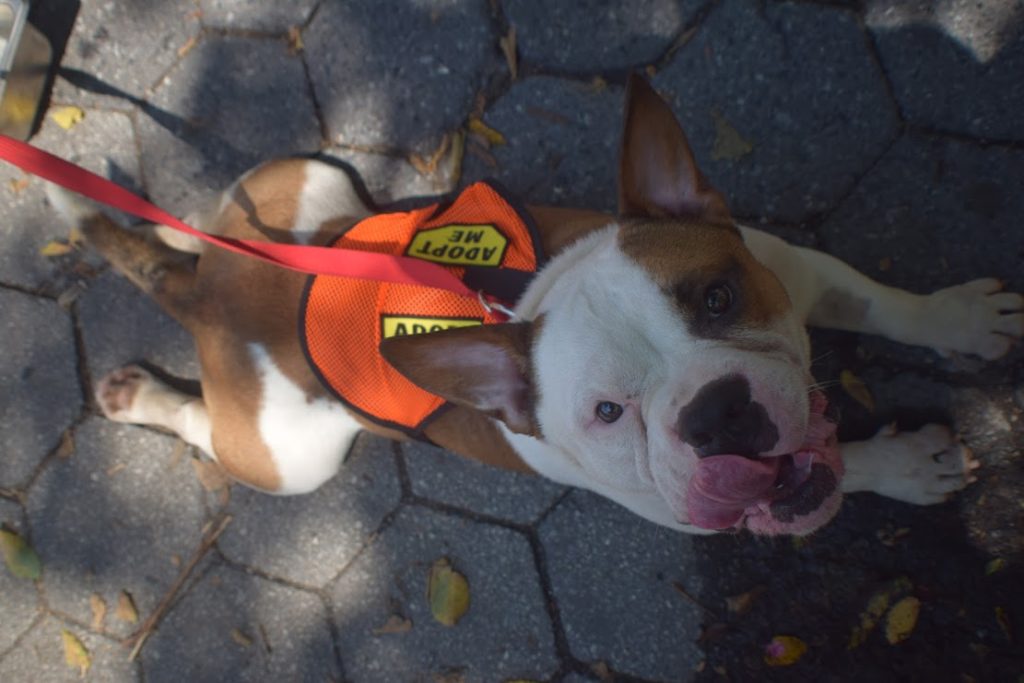 From the humblest of origins, a hero can emerge. In June of 2017, formerly known as Enchilada, now proudly called MIKE, this little Bulldog came to Zani’s Furry Friends ZFF. He was in bad shape. After we got him, he started feeling ill. A trip to the vet with an X-ray showed that this poor creature had swallowed a large chain! We worked hard to raise money for his surgery and nursed him back to health. Soon after, his furever family found him and the rest is history. Mike lives happily with his family in Rhode Island. Read on for Mike’s HAPPY TAIL.

My search to find an English Bulldog came about shortly after the loss of my 14 year old blind Bulldog, Melvin, whom I adopted from our local shelter where I volunteered walking dogs. It was then I fell in love with the breed, but knew there were none up for adoption locally. Then I searched for English Bulldog rescues in New England. After going through so many profiles, I found Enchilada now named Mike. Even though he was a mix (Mike’s DNA test 75% American Staffordshire Terrier & 25% English Bulldog), he fit the bill… loves people, loves other dogs and even cats (we have 4). The adoption process with Zani’s began. We couldn’t wait to bring Mike to our home.

My husband Gary and I enrolled him in basic foundation training at Dynamic Dog Training LLC . The owners Susan & Harry Parker were also volunteering at our local shelter, offering free training to the shelter dogs. When Susan met Mike, she said he would be the perfect candidate for the TF Green Airport Corp PVD Pups pet therapy program. After Mike’s foundation training, he earned his PVD PUP Airport Therapy Dog certificate. Now we take Mike to the airport every Sunday to offer pet therapy to nervous and anxious flyers or to anyone who just loves dogs. Mike performs tricks for kids that we run into at the airport (he’ll do anything for carrots!).

Every quarter, Mike, along with his other Paws from the Heart Pet Therapy dog friends, make visits to the students at New England Tech during exam week to offer stress relief. This past October, during finals week, we put on a little show for the students called the Paws Puppy Bowl where we had 2 teams of 3 dogs, performing tricks and commands. The team that earned the most points would be declared the winner.  Mike’s team, The Rawhides beat the Canine Crusaders!

Mike also participates in the Paws from the Heart shows which include a murder mystery and several holiday shows performed at the nursing homes and the airport. Mike loves to walk in the local parades with his other therapy dog friends.

When Mike is not on duty, he loves playing with the cats (on their terms), chewing on his power chewer toys, cuddling with me and his Gary, going for walks in our neighborhood (always has to carry a toy in his mouth) and car rides (he taught himself how to put down the window)

Mike has earned the following titles and certifications:

Create your own HAPPY TAIL – check out our ADOPTABLE DOGS page and fill out an ADOPTION APPLICATION. If you can’t adopt, consider FOSTERING A DOG. If you can’t foster, please DONATE so we can save more dogs like Mike.