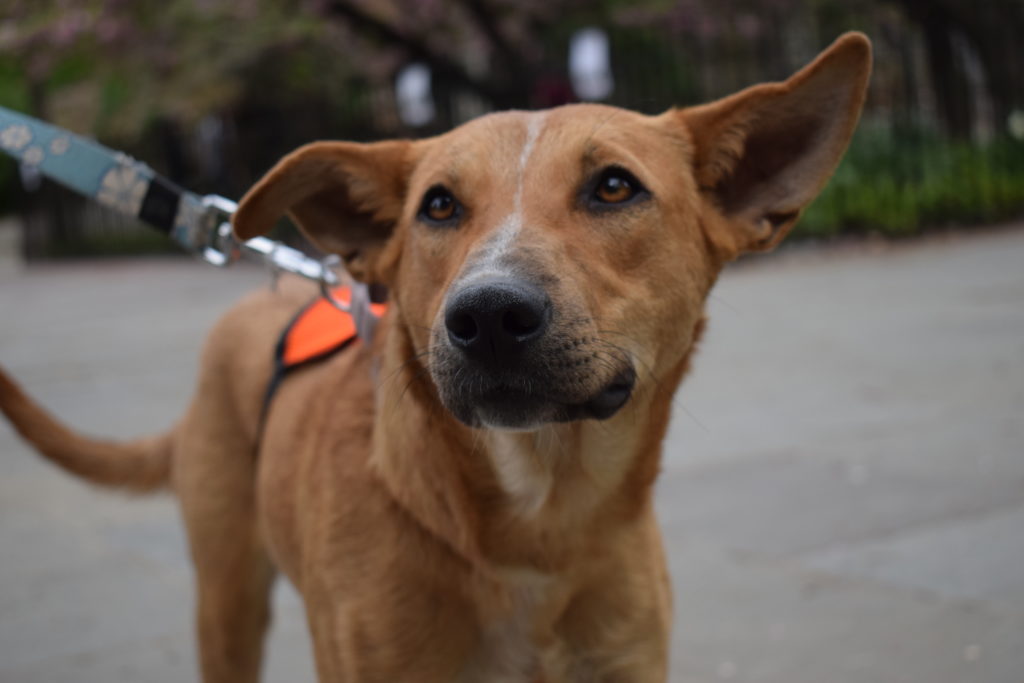 Browsing through our adoptable dog list or posts on Instagram, you have certainly come across the term “Baladi dog”

But what is a Baladi Dog?

When the word is applied to a dog, it generally refers to the native stray dogs who run the streets of Egypt. It is not a “breed” per se, but more of a “type” of dog. They are generally light and skinny with long lanky legs and comically big ears that either stand up like radars or flop half way, giving them a perpetually curious expression. These dogs also have a characteristic curly tail.

Baladi dogs  are the original sight hounds of the Middle East, descendants of the Egyptian Saluki, and Pharaoh Houds and Israeli Canaan dogs.

In addition to their specific look, they have a very specific ‘voice’ — they speak by growling which is not to put off humans but their way of communicating (think of how Basenjis yodle).  Their play style consists of chewing on the mouths of their playmates — lots of teeth but never any aggression. That’s just how they roll.

Baladi dogs do not have an easy life in the streets. People generally opt for purebred dogs that are considered “classy” while the Baladis are treated like pests (read vermin). They suffer abuse by individuals varying from being kicked, hit with hammers, thrown out of windows and balconies, poisoned and purposely run over by cars. There are even government and privately sponsored programs to capture and euthanize them, mainly due to nuisance complaints.

However, over the past few years, a number of groups and dedicated individuals have noticed the wonderful nature, sharp intelligence and unwavering loyalty of these dogs. They have been working tirelessly to help them. From raising animal welfare awareness, to launching TNR (trap, neuter and release) initiatives to reduce overpopulation all across Egypt. These groups work relentlessly to save the familiar, radar-eared creatures that are so common in the streets, all the while working as their advocates and personal Public Relations agents.

While adoption, especially of Baladi dogs, is not yet mainstream in Egypt, these dogs are starting to make headlines in the United States. ZFF partners with groups and individual rescuers who scoop up these dogs from abysmal conditions and in various states of health and then works with them to bring over these dogs to NYC to find them wonderful, forever homes.

This is not an easy process.

In order to bring a Baladi rescue to our side of the world, there are a lot of rules, regulations and expenses. Dogs need to have “flight parents” – people who can sign the dog in and out of the flight they are on. The dogs also need special crates, which, depending on their size can be up to a few hundred dollars. Even though the rescue groups in Egypt do as much as they can for these dogs, often they still arrive with health issues – such as skin problems  needing surgery and/or general health checkups.

Once they get here, there is also an adjustment period. While usually well-socialized with people and other pets by their rescuers in Egypt, most of these dogs have never experienced basic dog things we take for granted. They just had a very long and confusing experience on their flight over.–in a box!  And in the noisy luggage compartment of a plane. They are then released into an unfamiliar environment with new, strange people they have never met before, and in our case, of all places New York City!  Imagine it as a human equivalent of being transported and set free on a new planet with oxygen.  Most of these dogs have never worn a collar or harness and leash, played with a ball, had their picture taken or experienced cold and snow, or had a fluffy dog bed among other things.

One of my favorite things about being a Volunteer with ZFF is seeing how these clever dogs adapt. They go from shaking and cowering in the bushes to leaning on you in search of pats, demanding you throw them the ball and knowing exactly where you are hiding the treats in just a matter of days!

Baladis learn QUICKLY!  They are, after all, street dogs who must adapt to all situations to survive.  If “survival” means pleasing their person, they will do most anything for you.  But being so clever, they can also be sneaky and try to take advantage.

There are some considerations in training your Baladi dog. They can develop ‘brat behavior’ if not properly trained. They can start using their voices to keep new people away and if intimidating enough, they win–which reinforces their ability to get what they want. They can also develop dominant behaviors (up on furniture, for example) which again need to be corrected in a positive manner. These dogs need consistency and positively reinforced rules.

Baladi dogs require consistent love, praise, food rewards vs punishment of any kind, given their origins.  Being as intelligent as they are, they are willing recipients of learning good manners paired with rewards.

ZFF is always glad to provide advice on how to acclimate and train your new Baladi dog.

From their street smarts to their dashing looks, they are wonderful dogs and make for extremely loyal and fun companions.

Here is a wonderful video from the BBC about these glorious animals!

Check out our list of adoptable dogs (look for Baladis) or come see us at our next adoption event.

If you can’t adopt right now but would like to support our rescue mission, please donate!

Here are some of our Baladi success stories